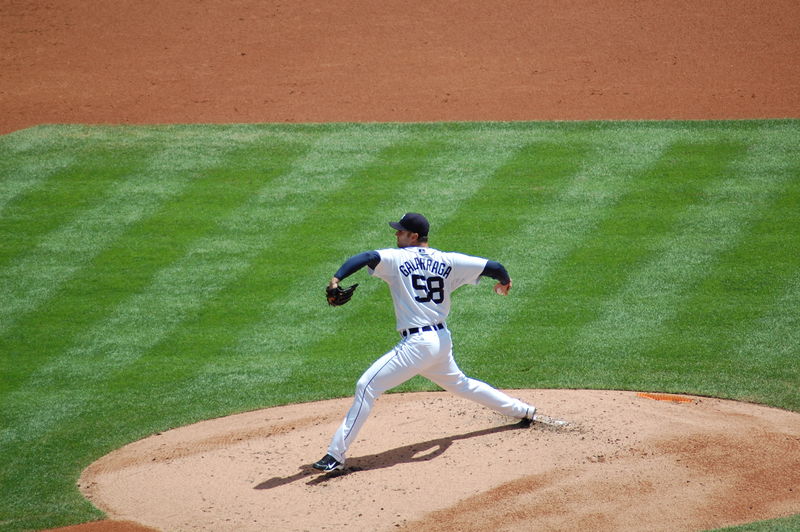 June 2nd, 2010. Detroit's Comerica Park. Tigers right-hander Armando Galarraga throws a nasty breaking ball that Cleveland Indians batter Jason Donald slaps to the right side. Tigers first baseman Miguel Cabrera runs to his right, fields the ball cleanly and throws to Galarraga covering first base. They've practiced this play thousands of times. They execute it flawlessly. As Galarraga catches the ball and steps on the bag, Cabrera jumps high in the air to celebrate the rare and precious thing that just happened.
Except, it didn't happen. But something better eventually did.
Some context:
A pitcher throws an official "perfect game" if he pitches a minimum of 9 innings, earns a victory, and no opposing batter reaches base. As of June 2nd, 2010, only 20 perfect games had been thrown in Major League Baseball's 140-year history. On average, that's one perfect game every seven years, although there had been stretches of 23 and 33 consecutive years without a single perfect game. No Detroit Tigers pitcher had ever thrown a perfect game.
Galarraga's pitch to Donald came in the top of the ninth inning, with two outs. The Tigers led 3-0. Galarraga had retired the first 26 batters he faced. Cabrera was celebrating because once Donald was called out at first base, Galarraga would become the 21st pitcher in the history of the major leagues to throw a perfect game, and the first Detroit Tiger to do so in the team's 110-year history.
Alas, it was not to be.
Jim Joyce, umpiring at first base that day, called Donald safe at first base.
Here's the play:

Everyone on the field, everyone in the stands, and everyone watching on TV knew it was a bad call. Donald should have been out. Under today's replay rules, the call would have been challenged and overturned, Galarraga would have become the first Detroit Tiger ever to throw a perfect game, and Jim Joyce would have been off the hook. But these replay rules were four years away from being adopted. In 2010, there could be no challenge, so the game continued, with Donald at first base. Galarraga got the next man out to end the game and ended up with a complete-game one-hit shutout. But no perfect game.

Minutes after the game ended, Joyce saw the replay. He only had to see it once to realize he had blown the call. He was devastated. He immediately asked to meet with Galarraga. This was a highly irregular act. Umpires don't meet with players. Nonetheless, Tigers president/general manager Dave Dombrowski personally escorted Galarraga from the Tigers' clubhouse to the umpires' room. Galarraga walked up to Joyce, embraced him and said, "We are all human." Joyce, crying, apologized in English and Spanish (Galarraga is Venezuelan) and left the room, unable to speak any further.
Later, Galarraga said to the media, "[Joyce] probably feels more bad than me. Nobody's perfect. Everybody's human. I understand. I give the guy a lot of credit for saying, 'I need to talk to you.' You don't see an umpire tell you that after a game. I gave him a hug."
Joyce, spoke (tearfully) to the media as well: "I just missed the damn call. ... And there's nobody that feels worse than I do. I take pride in this job and I kicked the shit out of that and I took a perfect game away from that kid over there who worked his ass off all night.... This was probably the most important call of my career and I missed it."
There is much more to this story. Like how the next day, Joyce was assigned to be the home plate umpire, and Leyland tasked Galarraga with delivering the Tigers' lineup card to Joyce, resulting in a tearful handshake and shoulder pat at home plate, acknowledged by the Comerica Park crowd with a warm ovation. Or how Joyce and Galarraga would go on to jointly write a book about the incident that would connect them forever.
But the essence will always be this:
A perfect game pales in comparison.


Attribution Note: This essay was inspired by this bleacher report article and includes background material from this Wikipedia article about Galarraga's near-perfect game and this book. The title image of Galarraga is by Arbitrarilyo.