Except it makes perfect sense, if you know the science.  It’s a matter of heat transfer, or the transition of heat (thermal energy) from a hotter object to a cooler object:


The amount of heat that moves between your body and the surrounding medium and the speed at which it moves, both of which are important to the sensation of warmth or cold that we feel, depends on how good a conductor the medium is. The reason the water feels colder than air is because water is the better conductor of the two. When you hop into that 60-degree pool, heat escapes your body much more easily than it would if you were standing beside the pool in 60-degree air. Because the water takes more heat from your body, and quicker, it feels colder.  (Read the full text here.)


As it turns out, our bodies constantly need to disperse heat, and when the temperature of the surrounding medium is equal to or higher than our body temperature, we are unable to effectively do so, hence we feel hot and uncomfortable.  All else being equal, the human body operates most efficiently when the air temperature is about 70°F.  Again, it all makes perfect sense, if you know the science.


Things don’t make sense.  Until you know the science, and then they do.   The question is, how should we handle those things for which the science is beyond our current understanding?  Hopefully by working hard on the science.  And being patient.  No need for irrational constructs.  Or fairy tales.  Just sayin’. 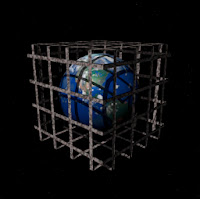 Aliens land on Earth.  They are neither as intelligent nor as emotionally evolved as human beings.  But they are more aggressive, and brandish weapons that render the humans defenseless against them.

The aliens target human children, since they are smaller and lighter than adults and thus less costly to transport.  They take them away from their parents, oblivious to (or, more likely, unmoved by) the parents’ horrifying screams of agony.  They capture many children, and ship them to their own planet.

Once there, the children are placed in concrete cells, no larger than a typical jail cell back on Earth.  They are taught to perform for the aliens in large arenas with hundreds of spectators.  They only leave their cells when they perform simple, demeaning tricks that the aliens in the audience find amusing, but that assault the children’s dignity every time they perform them.  The children receive food and water only as rewards for a trick well executed.

As the children grow and mature, semen is extracted from males and used to impregnate females.  Just a few months after the females give birth, their children are taken away so that they can perform at whatever arena is in need of a cute baby in its lineup.   Again, the mothers’ heartbreaking cries of agony are ignored.

The aliens that interact directly with the humans, known as “trainers”,  grow fond of them and even respect them, but they are not aware of how they were captured.  Neither are they familiar with their previous life on Earth, so they cannot fathom the difference between how they live under alien captivity and how their life would have been had they not been captured.  The trainers generally fail to understand that the captive children are growing up in an environment that traumatizes them, frustrates them and damages them psychologically, as well as physically.  The managers of the companies that own the arenas, though, are well aware of these facts.

There are many incidents at the arenas during which the humans act aggressively toward each other, and toward the trainers.  Most of the incidents involving the trainers result in minor injuries to them, but on a few occasions the trainers are maimed and killed.  The companies that run the arenas keep the incidents as secret as they can, and spin the facts of those they are forced to address to make it seem like the trainers were at fault.  Their ticket sales depend on the image their marketing teams have developed around the humans: they are beautiful, gentle creatures that are absolutely delighted to live in captivity, perform in the arenas and interact with their trainers.  Any story that challenges that image is squashed or spun.

Many trainers, once they understand the realities of their jobs, leave the arena companies and speak out against them, saying things like:  “I’m not at all interested in having my daughter, who is 3 and a half years old, grow up thinking that it’s normalized to have these intelligent, highly evolved animals in concrete cells… I think it’s atrocious.”

And, referring specifically to an incident where a human mother was separated from her child: “That’s heartbreaking.  How can anyone look at that and think that that is morally acceptable?  It’s not.  It is not OK.”

And:  “In 50 years we’ll look back on this [the human arena shows] and go “my God what a barbaric time”.

An alien government agency sues the arena companies for placing the trainers in dangerous working conditions, and wins.  During performances, the judge determines, there must be a physical barrier between the humans and the trainers.  The arena companies appeal the ruling.  The appeal is pending at this time.

There is some public outcry against the arena companies.  However, millions of aliens continue to flock to the arenas, convinced that what they are seeing are gentle creatures, joyfully interacting with their trainers, and thrilled to have the opportunity to perform for the alien audience.

Those millions could not possibly be more mistaken.

The foregoing tale is not fiction. It is a true story, and it is happening now.  Except,  the “aliens” are humans.  The “humans” are Orcas, also known as Killer Whales.  And the “arena companies” are SeaWorld, Sealand of the Pacific and Loro Parque.

The story is based entirely on the outstanding documentary “Blackfish”  by Gabriela Cowperthwaite, which was recommended to me by my daughter.  It is shocking, and heartbreaking.  Anyone considering a visit to SeaWorld should watch it.  And so should everyone else, for that matter.

You can watch it right now, on amazon.

Relics of a Bygone Era

My 15 year-old son tells me he’s pretty sure that, in a few years, the N-word will lose its negative connotation.  He bases his belief on the way the word is used in his high school, among kids of all races and backgrounds, but mostly among African-Americans, who feel comfortable utilizing it in a totally different manner than its traditional, abhorrent use.


I find my son’s theory hard to believe.  The word is so entrenched in our culture as an unconscionable insult and has been charged with hatred for so long, that I just can’t imagine it somehow shedding it’s vileness.  However, as I listen to the hip-hop music my son favors and watch shows like The Wire, which seems to be accurate in its portrayal of the vernacular of Baltimore’s inner city gangs, I do understand what he means.  The hip-hop guys, as well as the Baltimore inner city kids, use the word freely in a non-insulting manner.


In a situation with some similarities, an event took place a few days ago commemorating the first anniversary of the death of Canadian artist and poet ManWoman, who had been trying to “take back” the swastika since the 1960’s.  During the event, tattoo parlors around the world offered free swastika tattoos to the public, not as anything to do with the Nazis, but on the contrary, as part of a campaign to “reclaim” the symbol, which for thousands of years served as a Hindu and Buddhist sign of luck, peace, and strength before Adolf Hitler appropriated it as the symbol of the German Nazi Party.  Jewish groups were predictably (and perhaps understandably) outraged.


Can symbols like the swastika and words like the N-word be “reclaimed”?  If, as Theunis Bates indicates in his article on The Week, only the victims of offensive words and symbols have the right to reclaim them, will those victims ever do so?  It seems that at least some sectors of the African-American community are doing exactly that.   I don’t see anything of the sort going on with Jews and the swastika.  But maybe at some point it will, since it seems to me that wresting the evil away from a formerly benign symbol would effectively countermand its nefarious appropriation.   Imagine if, in our grandchildren’s history books, the swastika would be described as a Hindu and Buddhist sign of luck, peace and strength, temporarily and illegitimately appropriated by the Nazis as a symbol of the opposite.


I don’t know if the N-word will ever become an inoffensive part of our mainstream vocabulary, and I don’t know if the swastika will ever symbolize anything other than hatred.  But I do hope both things happen someday.  Because words and symbols have no power unless we bestow it upon them, and what we can bestow, we can remove.  If those victimized by the N-word and the swastika are somehow able to sap their evil, then maybe we would be closer to having moved on from those particular atrocities, and the heinous connotations of that word and of that symbol would become relics of a bygone era.