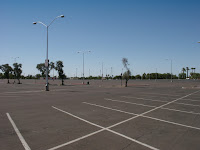 We show up at Seasalt and Pepper (since renamed “Seaspice”), a trendy eatery on the Miami River, at noon on a Sunday, without a reservation.  Not surprisingly, the hostess laughs at us when we ask about a table for two.  No problem, we say, we’ll just eat at the bar.  Of course, the bar is as replete as the restaurant.  So we stand around, waiting for a couple of bar stools to open up.


A few minutes later, a busboy sidles up to me and says, sotto voce, “Forty bucks and you’ll have a table right away.  Twenty for me, twenty for the waiter.”  I hand him two twenties, unsuccessfully attempting to be inconspicuous about it.  Three minutes later we are seated in a waterfront table for two, Bloody Marys in hand.  Although a part of me feels thrilled to have “beaten the system,” so to speak, most of me feels somehow soiled, as I think about the parties of two with legitimate reservations waiting outside while we enjoy the fruits of my questionable transaction.


Am I a shrewd operator, or a douchebag?  Are the waiter and busboy corrupt racketeers, or enterprising individuals seizing the opportunity? A few Bloody Marys later I’ve temporarily forgotten all about the questionable provenance of our marvelous setting.  But to this day, months later, it haunts me.  And I realize exactly what bothers me about it, as I remember Joe’s.


Joe’s Stone Crab Restaurant is a Miami Beach institution.  They famously do not take reservations, and 2 to 3 hour waiting periods for tables at dinnertime are common.  However, it’s an open secret among locals that slipping the maître d' $100 will get you a table quicker.  Much quicker.  The problem here, as is the problem with the entrepreneurial wait staff a Seasalt and Pepper, is that most customers are not aware that the “fast track” exists.  Tourists wait for hours while experienced diners get right in, oblivious to the fact that there is another possibility.


If Joe’s would advise patrons that they can wait 2 hours, or, in the alternative, pay $100 and be seated in 15 minutes, they can make a conscious choice, sort of the way theme parks offer “fast track” passes these days.  And although “fast track” scenarios have their own issues, elitism and divisiveness among them, at least there is the semblance of fairness: everyone is aware of the alternatives available, and you get what you pay for.  What most bothers me about Joe’s and Seasalt and Pepper is that people are unaware of the alternatives, and are actually punished for playing by the nominal rules, oblivious to the existence of the de facto rules which lurk, like the second set of books of a shady enterprise, under the surface.


Of course, part of what makes those “hidden” opportunities desirable is precisely that they are generally unknown.   Knowing valuable things that most people don’t know, particularly things that can be leveraged to obtain an advantage, strokes our egos, especially when we can use them to impress a member of the opposite sex.


Back to the Seasalt and Pepper episode.  Was I a shrewd operator or a douchebag?  Can you blame the waiter and busboy for taking advantage of an opportunity to supplement their presumably meager earnings?  What would have been the “right” thing to do?


Before answering, let’s consider the story of an American businessman who visits a client in Finland.  The Finnish client picks the American up at the American’s hotel in the morning, and they arrive at the client’s office building early, so the parking lot is empty. The Finn parks at the furthest spot from the office building’s front door.  The American is puzzled.  “With the parking lot empty, why would you park all the way out here when you can park right next to the front door?” he asks the Finn.  “We are early,” replies the Finn, “so we have plenty of time to walk.  Let’s leave the parking spots close to the door to those who are running late and can’t spare the time.”


The same criteria that would consider me a shrewd operator back at Seasalt and Pepper would consider the Finn a fool.   We live in a world where, given the chance, most people will act like I did, not like the Finn did.  Finding opportunities and taking advantage of them for personal gain are part of what makes us human, and the reason why capitalism is the only economic system that actually works.  But is the Finn a fool, or does he simply live within a more evolved society?  A place where a multitude of circumstances allow its inhabitants to act less greedily, and more magnanimously?  Will selfless, generous acts continue to be rare exceptions, or will they become more commonplace as humanity evolves?  Is it simply a matter of resources, in that people will be generous as long as resources are plentiful, but descend into greed the moment resources are scarce?


If I consider myself a microcosm of humanity, I see a glimmer of hope.  Because although at Seasalt and Pepper I clearly descended into selfish greed when presented with a scarcity of resources, at least I felt like a douchebag about doing it.

Last Saturday, Matt “Megatoad” Stonie ate 62 HDB’s (Hot Dogs and Buns) in ten minutes, thus upsetting 8-time and defending champion Joey “Jaws” Chestnut and winning the 2015 edition of Nathan’s Hot Dog Eating Contest.  The contest has been held in Coney Island on Independence Day since 1972, televised since 2003 (with a play-by-play announcer and color commentator) and is sanctioned by the International Federation of Competitive Eating.  As Gruber would say, I shit you not.


So, every year in Coney Island (and many other times at other IFOCE events) people actually hold officially sanctioned competitions where the objective is to consume as much food as possible during the allotted time.


Since the 16th century, the Festival of San Fermín has been held in Pamplona, Spain.  From an article today on time.com:


The festival’s most enduring legacy is the running of the bulls, or encierro, from the Spanish word for to corral or enclose. Held [beginning] on the second day of the festival, July 7 [and for the next 7 days], the encierro consists of letting loose a small number of bulls in the city streets while transporting them to the bullring for bullfighting.


But loose on the streets of Pamplona are not only the bulls, but also hundreds of men (and women, but mostly men) who take to the streets to run with the bulls, all the way from their corrals to the bullring where the bulls will ultimately die a horrific, painful death.   This despite the fact that each year between 200 and 300 people are injured during the run, and 15 people have been killed there since record keeping began in 1910.


For a week gay blades [as the bull runners were known at the time] stay up all night dancing and drinking, then gather at 7 o’clock in the morning for the encierro, the bull run. Yelling and jostling, they lead the bulls in a mad dash through the street toward the bullring. Last month’s fiesta was such a gay affair that almost nobody noticed when two of the encierro runners were killed by the bulls.


So, beginning tomorrow (as I write this) and for eight days every year, defenseless animals are brutally tortured and slaughtered, while intoxicated humans risk their lives for no apparent reason in Pamplona.


Today I saw “Inside Out”, Pixar’s latest masterpiece.  As the title suggests, the movie takes us inside the mind of a young girl, portraying the emotions that guide her as distinct characters.  I can’t describe this movie nearly as well as A.O. Scott, film critic for the New York Times:


“Inside Out” is an absolute delight — funny and charming, fast-moving and full of surprises. It is also a defense of sorrow, an argument for the necessity of melancholy dressed in the bright colors of entertainment. The youngest viewers will have a blast, while those older than Riley are likely to find themselves in tears. Not of grief, but of gratitude and recognition.


So, this weekend I read about the hot dog eating contest and the running of the bulls.  Today, I saw “Inside Out.”  And I contemplated the incoherence.  Human beings concocted and hold the absurd contest.  Human beings sanction and participate in the unconscionable running.  But human beings also made the warm, sensitive, insightful and nuanced movie.  I’m ashamed and proud of my species at the same time.