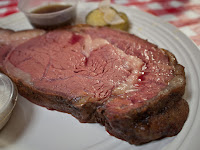 The prime rib was spectacular, but larger than what I wanted to consume in one sitting, so I asked our waitress, the lovely Natalia, if I could take the remaining portion home with me.  “Of course,” she said, taking the plate with her.  Upon her return, she handed me a small shopping bag with a cardboard box inside.  You see, Hillstone is not one of those places where they throw a container at you so you can pack your own to-go box.  Neither is it one of those places where they simply throw the leftover food into a box, as I found out when I got home and unpacked my bag.  I was delighted to discover the leftover prime rib carefully placed in a perfectly sized box along with two sturdy containers, one with fresh horseradish sauce and the other with fresh au jus.  Rather than treat my request to take my leftovers home as a burdensome task, Natalia took it as an opportunity to prepare a picnic basket for me.  She didn’t make a big deal out of it; that’s just how it’s done at Hillstone.

A few weeks ago I had lunch at the Hillstone bar, and ordered a salad.  A few minutes later, Kristen (the bartender) apologized profusely, telling me they were out of that particular salad.   So I ordered a different one.  No big deal; all of their salads are delicious.    When I went to pay my check, I noticed that the total was $3.45, the cost of the club soda I had ordered along with my salad.  I brought it to Kristen’s attention, thinking that due to the change in the salad order they had mistakenly left it out of the bill.  “No mistake,” said Kristen, “We didn’t have the salad you wanted, so there’s no charge.”

At a lesser restaurant, the server would have made a point of telling me about the free salad. Kristen didn’t even mention it; that’s just how it’s done at Hillstone.

What impresses me the most is that no attention is called to any of those things.  At Hillstone, they do everything right, but they don’t brag about it.  No big deal.  This is just how we do it.  Here.

I’m a fan of the running back who, after scoring a touchdown, simply tosses the football to the referee.  He understands that allowing others to celebrate your accomplishments enhances them, while calling attention to them yourself diminishes them.  And I’m a fan of Hillstone, where excellence is par for the course, taken for granted by those who work there, but never by those who are fortunate enough to dine there.  Or drink there.  Or both.