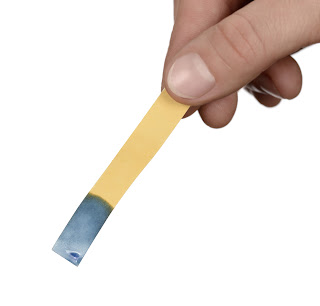 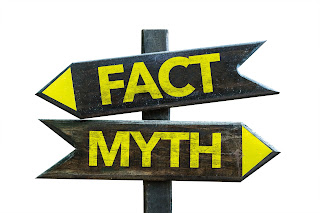 From Envy to Pariah 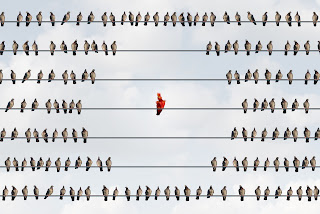 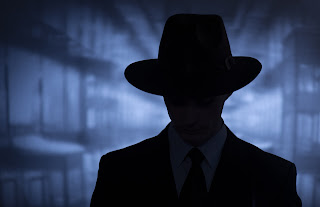 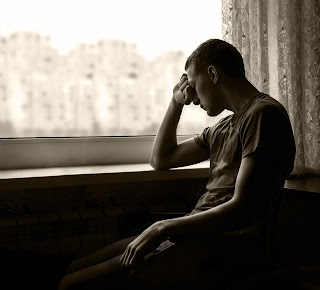 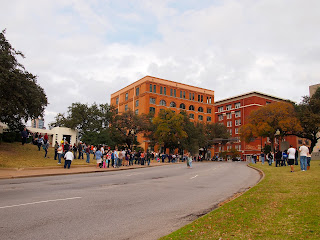 The White House publicly announced the trip in September of 1963.

Abraham was born on May 15th, 1905, in Kovel, then in the Russian Empire, now in Ukraine. In 1909, his father, Israel, left for America. In 1918, Abraham and his family traveled to Warsaw. During that journey, Abraham's brother was pulled off a train and murdered by Polish guards. In 1920, Abraham and the remaining members of his family emigrated to the United States and reunited with Israel in Brooklyn.

The plan was for President Kennedy to take a short flight from Carswell Air Force Base in Fort Worth to Dallas Love Field, then the city's main airport. He was to ride in a motorcade through Dallas in a route specifically designed to give him maximum exposure to local crowds. The planned route ended at the Dallas Trade Mart, where the President's staff had scheduled lunch with civic and business leaders.

Abraham found work as a clothing pattern maker in Manhattan's garment district, and studied English at night. In 1933, he married Lillian Sapovnic, with whom he had two children.

The flight from Fort Worth landed at Love Field at 11:25 am on November 22nd, 1963. At 11:40, President Kennedy's motorcade left Love Field for the trip through Dallas, taking a meandering route amid enthusiastic crowds, estimated at 200,000 people. Kennedy directed two unscheduled stops, during which he mingled with the masses.

In 1941, Abraham was offered a job by sportswear company Nardis of Dallas. He moved his family there and, eight years later, co-founded his own company, Jennifer Juniors, Inc. His company rented office space on the fourth floor of the Dal-Tex building, located in Dealey Plaza, across the street from the Texas Book Depository.

President Kennedy and his wife Jacqueline were riding in the back seat of an open-top 1961 Lincoln Continental four-door convertible limousine. Governor Connally and his wife, Nellie, were in the front seat. As the Lincoln entered Dealey Plaza at 12:30 pm, Nellie Connally turned to Kennedy, who was sitting behind her, and said, "Mr. President, you can't say Dallas doesn't love you."

Kennedy replied, "No, you certainly can't."

Abraham considered himself a Democrat and admired President Kennedy. He owned a top-of-the-line 8mm Bell & Howell Zoomatic Series Model 414 PD film camera and planned to film the motorcade when it passed near his office. But it was raining on the morning of the 22nd, so he left the camera at home. When Abraham arrived at work without the camera, though, his assistant, Marilyn Sitzman, insisted that he go home and retrieve it since the weather had cleared.

Abraham had planned to film the motorcade from his office window, but decided, at the last minute, to position himself on the top of a 4-foot concrete abutment on the grassy knoll north of Elm Street. Abraham suffered from vertigo and was afraid of standing alone on the abutment, so Sitzman stood behind him and held his coat to steady him as he began filming the presidential motorcade.

It's difficult to think of two people whose paths seemed unlikelier to cross than John F. Kennedy and Abraham Zapruder.  Yet, the 26.6 seconds of haunting horror that became known as the "Zapruder film" permanently linked the two men.

Two days later, Lee Harvey Oswald, charged with Kennedy's assassination, was shot by Jack Ruby at Dallas Police Headquarters. He was rushed to and pronounced dead at Parkland Memorial Hospital. 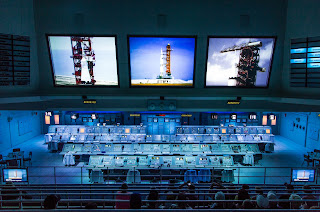 Aaron
"Flight, EECOM. Try SCE to aux."
On November 14th, 1969, those six words saved Apollo 12.
36.5 seconds after lift-off, lightning struck the Saturn V rocket.  Protective circuits kicked in, shutting down all three fuel cells.  Nearly every warning light on the Command Module's control panel lit up.  Its instrumentation malfunctioned.  The telemetry the spacecraft sent back to Houston's Mission Control became garbled and useless.
Flight director Gerry Griffin was ready to abort the mission.  But Aaron was in the room.
As the man in charge of the spacecraft's electrical, environmental, and communications systems (EECOM), 27-year-old Aaron had an encyclopedic knowledge of those systems, as well as an eidetic memory.  At that critical moment, he recalled a simulation he had witnessed at Kennedy Space Center a year before.  He had noticed unusual telemetry readings and, on his initiative, traced the anomaly back to the obscure Signal Conditioning Electronics (SCE) system.  He had determined that switching the SCE to its auxiliary setting would reset the instrumentation and restore accurate readings.
The SCE was so arcane that Aaron was the only flight controller on duty that day familiar with it. When he suggested that the astronauts in the capsule switch the SCE to auxiliary, neither Flight Director Griffin, CAPCOM (capsule communicator) Gerald Carr nor Mission Commander Pete Conrad knew what Aaron was talking about.  But Lunar Module Pilot Alan Bean remembered the location of the SCE switch inside the capsule from a training incident a year earlier.
Bean flipped the switch to aux. The action immediately restored telemetry and saved the mission.
John
John grew up in the sticks. A "very rural community," he called it. There were but nine people in his Vinson, Oklahoma high school graduating class. His mother was a minister, his father, a cattle rancher.
John wanted to teach, but only to make enough money to get into his dream profession: raising cattle.  He entered college seeking degrees in physics and math, intending to teach those subjects until he had saved enough to establish a herd of Herefords.
Once in college, he became enamored with physics and math, and neglected to take the education courses he needed to obtain a teaching degree.
John would have to go to school an extra year to complete the courses he required.  He wasn't looking forward to that.
Aaron
April 13th, 1970. Apollo 13 was on its way to the moon.  Aaron, still EECOM Manager, was off-shift, at home, shaving. The phone rang.
There had been an explosion. Apollo 13's Command Module was crippled. The spacecraft could no longer generate electricity.  The only power sources remaining were a few batteries. Landing on the moon was out of the question.  The new mission objective: get the three astronauts, Jim Lovell, Fred Haise, and Jack Swigert, back home safely.
Mission Control had shut the Command Module down.  The astronauts had moved to the cramped Lunar Module, which had become a makeshift lifeboat. They had successfully established a "free-return trajectory" and were on their way back home.  To survive the fiery re-entry through the Earth's atmosphere, they would need the protection of the Command Module's heat shield.  They were going to have to get back into the Command Module and power it back up. The Command Module had never been shut down during flight before.  It had never been powered up during flight, either.
Would it power up at all?  Even if it did, the power left in the batteries seemed nowhere near what was necessary to run even just the essential systems. The power would undoubtedly run out way before the spacecraft reached Earth. Lovell, Haise, and Swigert were doomed.
Flight Director Gene Kranz made a critical decision.  He made one man and one man only, responsible for the mission's power supply.  Aaron.
Aaron realized that the sequence in which the astronauts powered up the systems would have a massive impact on the amount of power used. He devised an innovative power-up procedure that would turn on the instrumentation system, which included telemetry and communication, last. This sequence ran contrary to accepted methods. Without instrumentation, the crew and flight controllers would not know if the cold startup had been successful until the last possible moment before re-entry. Furthermore, the astronauts in charge of executing the sequence were cold, hungry, thirsty, and sleep-deprived, making a complicated process even more fraught. But Aaron determined that powering up in any other order would result in the capsule exhausting its battery supply way before splashdown. Although quite risky, this sequence was, really, the only choice.
The procedure was a success. The crew made it home safely.  Once again, Aaron saved the day.
John
Just as John was reluctantly resigning himself to another year of college, Richard Bates, a friend of John's who had graduated a year before, told John that NASA was hiring people to work on the space program.  John knew nothing about NASA or the space program, but at Bates's suggestion, he submitted a Form 57, NASA's employment application.  He thought he might get an interview.
Instead, he received a telegram from Mona Kazmierski of NASA's human resources department. The telegram constituted a job offer. The job paid $6,770 per year, more money than John had ever seen. He recalls:

Well, you know, I'm broke. I'll go down there and do that a couple of years, and then I'll come back and raise Herefords.

That was my plan.

Fortunately, things didn't go according to plan.
John Aaron
John Aaron was born in Wellington, Texas, and grew up near Vinson, Oklahoma.  He spent a year at Bethany Nazarene College, then transferred to Southwestern Oklahoma State University, where he graduated in 1964 with a B.S. in Physics.  Later that year, John Aaron arrived at NASA and was immediately trained as an EECOM.  He retired from NASA in 2000.
He neither taught, nor raised cattle.
Instead, he became, as his NASA colleagues dubbed him, a "steely-eyed missile man."
_______________________________________________________________________________
Attribution Note: In addition to the articles linked above, background information for this essay was gathered from the following Wikipedia articles: Apollo 12 and Apollo 13.  I also consulted this NASA document, this  NASA fandom page and this NASA Oral History Project interview transcript.
This essay was inspired by the fantastic podcast, 13 Minutes to the Moon.  Season 1 describes the descent of Apollo 11's Lunar Module to the surface of the moon, and Season 2 recreates the entire Apollo 13 mission through interviews with the mission's actual astronauts (except for Jack Swigert, who died in 1982) and mission controllers.  13 Minutes to the Moon is an original podcast from the BBC World Service.  But you should really listen to Kevin Fong say that.
Posted by Jack Azout at 12:59 PM