Last week, I made a bargain with myself. I'd splurge on an awesome mechanical keyboard, but only if I made a commitment to write more. The keyboard is here, my first blog post using it is published, and I hope to keep up at least a somewhat consistent pace. The timing is ideal, since both you and I have more time on our hands these days.
As part of this renewed commitment, I also finally got around to doing something I've been meaning to for years. The name of my blog, Techetysem (a portmanteau of Technology, Etymology, and Semantics), besides being a truly terrible name, reflected what I initially thought I would write about, but not what I ended up writing about. Sure, there are a couple of posts about Etymology and many about Technology, but the blog is much broader. So I decided to rebrand it, and, while looking through my photos for a nice background image I came across a photo that I heavily cropped to result in the image you see on the right. I love that photo for many reasons: it was taken by my wife, it was taken at one of my favorite bars in my favorite city, and the expression I'm making is both genuine and typical.
I had found the right image for my blog, and the image inspired its new name. Azout Askance.
Besides cleaning up the blog's layout, I also removed the ads. The comically minuscule revenue from Google AdSense did not come close to justifying the negative impact the ads had on the reading experience. No more ads.
There's a new "Follow by Email" feature, so in addition to subscribing via RSS (which has always been available), you can now sign up to receive an email notification whenever a new post is published. There's a new "Blog Archive," so you can still search for a post using keywords, but now you can also look up posts by year, month, and title. Lastly, there's a contact form you can use to quickly email me, which I hope you will, because I welcome and appreciate your feedback, negative or positive.
New keyboard. New branding. New layout. New features. Hopefully a rejuvenated writing schedule. I hope to see you here again soon.
Thank you so much for reading.

It was Game 5 of the 1968 World Series. The St. Louis Cardinals vs. the Detroit Tigers. Tiger Stadium, Detroit. Monday, October 7th, 1:00pm.
Tigers broadcaster Ernie Harwell had invited Jose Feliciano, the blind Puerto Rican singer who had had a hit earlier in the year covering The Doors' "Light My Fire," to sing the national anthem. So, a few minutes before game time, Feliciano walks out on the field with his guide dog and acoustic guitar.
Before you listen to my all-time favorite rendition of "The Star Spangled Banner," let me give you some context. 1968 was, according to Wikipedia, "one of the most turbulent and traumatic years of the 20th Century in the United States." Martin Luther King, Jr. and Robert F. Kennedy were assassinated that year. Over half a million U.S. troops were on the ground in Vietnam. Controversy about the war erupted into widespread protests and riots. The nation was sharply divided among many fronts: pro-war/anti-war, conservative/liberal, young/old, black/white, hippie/square.
Jose Feliciano did this:

No one had ever taken such liberties with that song. Ever. In fact, in a delicious bit of irony, the day before, for Game 4 of the series, Marvin Gaye, (who would, of course, go on to deliver a wonderfully groovy rendition of the anthem at the 1983 NBA All-Star Game) had performed it quite conventionally.
As is evident by the crowd's reaction, Feliciano's rendition was highly controversial at the time. Victor Mather, writing for The New York Times, collected a few quotes:
"It was a disgrace. An insult," said Arlene Raicevish, a Detroit baseball fan. "I'm going to write my senator about it."
Another Tiger fan, Bernie Gray: "It sounded like a hippie was singing it."
Cardinals pitcher Dick Hughes: “Thumbs down all the way. That’s a conformist’s song and should be sung the way it was written.”
But Cardinals catcher Tim McCarver said: “Why not that way? People go through a routine when they play the anthem. They stand up and yawn and almost fall asleep. This way, at least they listened.” (I've always liked McCarver. Now that I know this about him, I like him even better.)
The quote of the day, though, came from Tigers catcher Bill Frehan: “I know one thing. He made Marvin Gaye ... sound like a square.”
Feliciano's courageous, trailblazing performance proved to be damaging to his career in the months and years that followed. Yet RCA Records saw an opportunity and released the anthem as a single. It charted for five weeks on the Billboard Hot 100, the first time that song had been on any American music chart. That particular recording of the national anthem became a permanent exhibit at the Baseball Hall of Fame. And, of course, in the decades that followed, it became commonplace for performers to put their own individual stamp on "The Star Spangled Banner."
May 10, 2010. The Detroit Tigers host the New York Yankees at Comerica Park, which replaced Tiger Stadium as the home of the Tigers in 2000. The P.A. announcer introduces that day's national anthem performer:
"And now, please welcome a very special performer for tonight's national anthem. On October 7th, 1968, Ernie Harwell invited Jose Feliciano to perform "The Star Spangled Banner" before Game 5 of the 1968 World Series. Feliciano made history that day by performing the first reinterpretation of the national anthem on a very public, very national stage. And now, 42 years later, please welcome back, to perform our national anthem, Jose Feliciano!"
Feliciano's performance that day was almost identical to 1968's. It was received with a resounding ovation.
I'm sure that even today there are those who frown upon reinterpretations of "The Star Spangled Banner." What they don't realize is that although there are various traditional stylings of our national anthem, there is no official version. Whether it's Jimi Hendrix blasting it out on his magical electric guitar, Marvin Gaye adorning it with rhythm and blues, or Feliciano lovingly re-imagining it with a gentle touch of his own, each is imbuing the anthem with their own identity and heritage. In 1968, Jose Feliciano eloquently made the case that our anthem could be as diverse as our populace.
What could possibly be more American?

Just a Matter of When 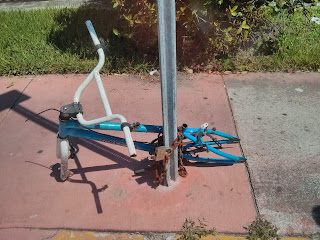 I haven't written in this space for a while.  Last I wrote, I was pondering the detrimental effects parents have on children, and positing that we would all be better off if parenting were left to professionals.  I wish I still had the luxury of such philosophical pursuits. My thoughts these days deal almost exclusively with the realm of the existential.

If you've read my stuff you know that I hold no hope for humanity.  We will be, at best, a footnote in the history of this planet; a species that had great potential, yet was unable to evolve past its tribal, aggressive, and myopic nature, resulting in its inevitable demise.

Maybe that demise will originate in an armed conflict.  Or maybe we will will finally succeed in making our planet's environment inhospitable to ourselves.  Or maybe, as illustrated by current events, we will continue to encroach upon other species enough to make it commonplace for their diseases to spread to us; diseases that we are ill-equipped to handle physically and lack the temperament to mitigate sociologically.

The current pandemic will not result in humanity's demise.  Maybe the next pandemic will. But regardless of what brings about the extinction of the ironically named Homo Sapiens (Latin for "wise man." Really?), it will be brought upon by ourselves.  We will be the first species on Earth to have made ourselves extinct, through our own actions. It's just a matter of when.