Assault on the Wall 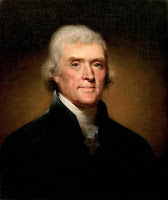 
Let’s get this straight, Mr. Huckabee.  You, a Southern Baptist, believe in God.  You also apparently believe that God created marriage.  Therefore, if the only form of marriage recognized by your particular faith is between one man and one woman, then that should be its legal definition, regardless of the Supreme Court’s interpretation of the Constitution and of the applicable laws.  Doesn’t that position, Mr. Huckabee, represent the “establishment of religion,” in clear violation of the 1st amendment?  Of course it does!  But then, in the words of  Michael Stone, your “good-natured manner masks a dangerous yearning for an America that never was, but could be: a Christian theocracy built on ignorance and religious superstition.”


But let’s say, just for argument’s sake, that we accept your absurd premise that a religion’s definition of marriage should determine its legal definition.  Why should it be your particular religion?  What would you say to the over 2 million members of the Episcopal Church, who believe that same sex marriage is well within their religion’s definition of marriage?  Would you tell them that your beliefs supercede theirs?  How about the 1 million members of the United Church of Christ?  Your fairy tale is better than theirs?  Or what would you say to non believers, such as myself?  Never mind, in your view we don’t really count for anything, since we don’t have a prayer, and should even be fired from working for the government.


So you see, Mr. Huckabee, the only way to truly respect our freedom, our diversity, and our religions (including yours), is to separate them from government.  Our founding fathers, men of vision and foresight, realized how dangerous you and your ilk were to the Republic.   Thomas Jefferson:


Believing with you that religion is a matter which lies solely between man & his god, that he owes account to none other for his faith or his worship, that the legitimate powers of government reach actions only, and not opinions, I contemplate with sovereign reverence that act of the whole American people which declared that their legislature should make no law respecting an establishment of religion, or prohibiting the free exercise thereof, thus building a wall of separation between church and state.


Mr. Huckabee, your assault on that precious wall of separation is stunningly offensive to all Americans.  Your statement was shockingly absurd, and richly deserving of outrage and ridicule.  And I believe (and fervently hope) that the reason it didn’t generate the storm of controversy that it should have is not that people didn’t find the statement objectionable, but that they did, but dismiss you as a charlatan with no shot as a candidate and whose pronouncements are not worthy of further discussion.