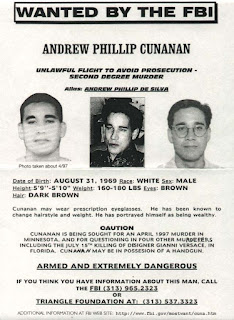 Andrew Cunanan never had a chance.

Raised by a deranged, abusive father and a feckless mother, Cunanan was, no doubt, going to turn out badly.  And, as brilliantly recounted in the second season of FX’s true crime anthology, “The Assassination of Gianni Versace: American Crime Story,” he ended up murdering Versace, as well as Jeff Trail, David Madson, Lee Miglin, and William Reese.  Clearly, Modesto “Pete” Cunanan, Andrew’s father, and Mary Anne Schillaci, his mother, had no business having children.

The thing is, one doesn’t have to raise a serial killer to be an inadequate parent.  The horrifying statistics on child hunger, child abuse, and child sexual abuse clearly demonstrate that as much as most people consider (somewhat irrationally, in my view) that having and raising children is a necessary, even obligatory, part of life, a shocking percentage of us are either unqualified, incapable (for financial, emotional, or other reasons) or unwilling to do the things necessary to raise children to be happy, well-adjusted adults.

Furthermore, raising children prevents adults (women in particular) from reaching their potential, not only with regard to their careers, but as human beings.  Children wreak havoc with relationships. And if it weren’t demanding enough to raise healthy children, many parents, through no fault of their own, are faced with the challenge of raising children with diseases or genetic conditions that  render them helpless to ever fend for themselves. Good parents make all sorts of compromises, sacrifices and allowances in order to provide children with what they need.  But many (if not most) parents don’t, resulting in neglected children, disturbed adults, and all sorts of mayhem.

I know what you’re thinking.  Raising children doesn’t prevent parents from reaching their potential; in fact, the opposite is true: raising children is the ultimate human endeavor, and nothing fulfills people more that parenting.  Sorry, I’m not buying it. I’m a parent, and I love my children, but, by any objective standard, humans in general are doing a horrible job of raising their own offspring.  If it were so fulfilling, we would be, in the aggregate, doing a better job.

Of course, there are many people in the world that are amply qualified, willing and able to raise children, and some of them actually do so, as parents themselves, or as proxies for parents who delegate some, or most, of the parenting.  What if, instead of allowing people to spew out children willy nilly, whether qualified to raise them or not, we restrict parenting to those exceptionally qualified for it?

Imagine a place where…

The word “parent” has no meaning.  All children are born in specialized institutions.  Their care, from conception to adulthood, is handled by specialists, specifically trained for their role at each stage of the child’s development.  “Gestation” is a career. So are infant care, toddler care, child care and adolescent care, along with the appropriate education every step of the way. And yes, this includes wet nursing, since “there is no medical reason why women should not lactate indefinitely or feed more than one child simultaneously” (Dr. Gabrielle Palmer, quoted by Wikipedia).

OK, let’s start from the beginning.  How are the babies conceived? During the “adolescent” stage, the children's education obviously includes topics dealing with sexuality.  During this period, eggs are harvested from each young woman, and each young man contributes sperm. There are double-blind procedures in place so that the donors are in no way associated with their donations.  Random samples are picked to be combined in-vitro, and presto! Gestation begins, handled by women who have chosen to carry babies to term as their career.  And so it continues; the children are cared for and educated at every stage of their lives by qualified, caring professionals.

These professionals are people who have chosen to dedicate their lives to caring for, educating and, yes, loving children.  Many people would take issue with my contention that someone other than a biological parent can give a child the same love and tenderness, but, again, I’m not buying it.  Examples abound: adoptive parents, nannies, foster parents, nurses, social workers, etc. The difference is that these professionals are caring for children because that’s what they want to do.  They are fulfilling what they perceive to be their calling.

Shortly after each adolescent makes their “donation,” they are sterilized.  They have provided their contribution to species procreation, and can now complete the last stages of their education, and, indeed, the rest of their lives, unencumbered by worries of unwanted pregnancies.  Once they complete their college education they are inserted into the adult world, ready to lead happy, fulfilling, productive lives. No compromises, sacrifices or allowances. No children around for predators to abuse.  No parental responsibility, no parental guilt. Each adult is responsible for themselves, no one else. People can choose to share their lives with a partner, but if things don’t work out they will not have to “soldier on” for the children’s sake.  No need for anyone to care for aging parents either; specialized institutions would exist for that, just as they do today, except nobody would feel guilty about their parents being there, since nobody is anybody’s parent.

According to the venerable Childhelp, this is the world we live in today:

Every year more than 3.6 million referrals are made to child protection agencies involving more than 6.6 million children (a referral can include multiple children).

The United States has one of the worst records among industrialized nations – losing on average between four and seven children every day to child abuse and neglect.

A report of child abuse is made every ten seconds.

The world I describe will sound utopian to some, dystopian to others.  But can it possibly be any worse?