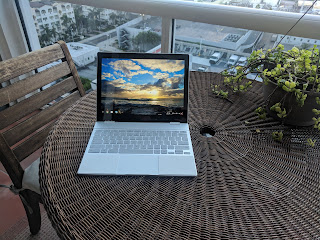 I came of age in the mid-1970’s, just as “personal computers” were beginning to emerge, so I’ve been privileged to witness the entirety of the PC’s history so far.  The first computer I ever interacted with was an Apple ][ running VisiCalc, the first electronic spreadsheet, in 1979.  Fundamentally speaking, today’s Microsoft Excel is not much different than the VisiCalc of 38 years ago… but I digress.


In the early 80’s I moved to an IBM PC, and from there naturally progressed to the so-called “clones” of the era, made by the likes of Compaq, Dell, and Gateway, and from DOS to Windows.  1995 saw me switch to my first portable computer, a Toshiba Satellite running Windows 3.1.  I stayed firmly in the Wintel camp for over twenty years, culminating in a gorgeous IBM ThinkPad 600X running Windows 2000.  But on December 9, 2001, I walked into the brand new Apple Store at The Falls, and fell in love with (and walked out the door with) an irresistible Titanium PowerBook G4, running the nascent  Mac OS X.  (My “TiBook” had Mac OS X version 10.1 “Puma” initially installed.)


Just like that, Windows was out of my life, and Mac OS X (now macOS) was in.  For the next eleven years I used various PowerBooks, Macbook Pros, and MacBook Airs.


By 2012, all of my data had resided in the cloud for years, and I realized that I was vastly underutilizing my computers by running a complex operating system while only actually using the browser.  It seemed wasteful and unnecessarily rife with complications, potential pitfalls, and constant maintenance.  Enter Chrome OS, and the advent of inexpensive Chromebooks.  I switched  to a $249 Samsung Chromebook, and never looked back.  I happily used Chromebooks as my primary computers for the next five years, moving from the unapologetically cheesy yet totally functional Samsung to a much nicer Dell, and later to Google’s best-in-class Pixel series.  I even connected Chromeboxes to my TVs.  I delighted in using a hassle-free operating system that was precisely the right tool for the job.


During its 2017 Worldwide Developers Conference, Apple announced iOS 11, the newest version of the software that runs iPhones and iPads.  The major changes to this version of iOS specifically addressed iPad productivity, and the software featured a complete overhaul of iPad multitasking and the ability to comfortably work with two, even three apps side by side.  While watching the keynote, I felt that with iOS 11, Apple was clearly confirming that yes, as CEO Tim Cook is fond of saying, “The iPad is the clearest expression of our vision of the future of personal computing.”  A few days later, last June 19th, I walked out of my friendly neighborhood Apple Store with a new 12.9” iPad Pro and an accompanying Smart Keyboard.


My plan was to set my Pixel aside, and use the iPad exclusively for all of my computing needs.  And that I did, for almost five months.  Manipulating my data directly with my fingers, instead of indirectly through mouse and keyboard, felt liberating.  Many of the native apps I used were more polished and delightful to use than the corresponding websites I had used on Chrome OS.  The new multitasking paradigm brought on by iOS 11 worked beautifully, allowing me to quickly and easily work with multiple apps simultaneously.  And I still had browsers, so I could theoretically do everything I could do before on Chrome OS, except now I could choose between a native app or a web app, depending on which was better for each specific service.  Furthermore, the iPad was much lighter than the Pixel, and had built-in LTE connectivity.


All of that said, I’m writing this article on my new Google Pixelbook.  Here’s why:


I’m heavily invested in Google services.  By “invested in” I don’t mean “locked in” though.  I control my domain’s email, so I could use any email app instead of going through Gmail, as I choose to do.  I could easily transfer my files from Google Drive to Dropbox, iCloud, or anywhere else.  I could elect to open my Google Sheets in Excel, or my Google Docs in Word (which are both outstanding on iOS), and use those apps instead of Google’s.  There are many excellent iOS calendar apps that use Google Calendar (which I have used for over 14 years) as a backend.  But I use Google’s services because I find them to be unparalleled in terms of quality, reliability and feature set.  And I also find that the web and Google’s native clients on Android are the best ways to access Google’s services.


But accessing Google’s services via Google’s native iOS clients on the iPad is a subpar experience.  Gmail is severely limited, and so is Google calendar.  Google Sheets is frustratingly buggy and, again, severely limited.  But, wait a minute, I can just use an iOS browser, right?  Safari, or even Google’s own Chrome!


Not so fast.  Gmail and Google Calendar don’t work well on any iOS browser, not even Chrome.  When you try to access, say, Gmail on iOS Chrome, Google helpfully points you to their Gmail app.  Same with Calendar.  If you force the issue, you can actually run Gmail and Google Calendar on iOS Chrome, but again, neither works well.  Google Sheets and Docs (and, for that matter, Slides and Forms) will not work on iOS Chrome at all; the browser just punts to the native apps, which as enumerated above, lack essential features.


Loving the interaction with my iPad, though, I looked for workarounds.  I used Airmail, and Outlook, and Spark.  I used Fantastical.  I opened a few of my spreadsheets in Excel.  But none of this felt right.  So I had a choice:  use Google services as they are meant to be used, on a full-fledged browser on my Pixel, but lose the delightful and efficient iOS 11-on-iPad experience, or keep the experience but interact with my Google data in substandard or unsatisfying indirect ways.  Both alternatives had significant compromises.


Enter the Pixelbook.  The concept behind it is not new.  A so-called “convertible.”  A laptop that doubles as a tablet.  Microsoft has a whole line of Surface Pros and Surface Books.  Lenovo, Dell and others have their own takes on the concept.  But they all run Windows, not exactly a hassle-free, bulletproof operating system like Chrome OS, or, to a lesser extent, iOS.  There are four different ways to use a Pixelbook: as a laptop, a viewing stand, a tablet, and in “tent mode” (which is the same as as a viewing stand but upside-down.) And the kicker: the Pixelbook, besides running Chrome OS, also runs Android apps.


So with the Pixelbook configured as a laptop I can run Gmail, Google Calendar, Sheets and Docs as they were meant to be run.  I can then flip the screen and manipulate my data directly, whether using web apps or Android apps.  And using it in viewing angle mode, either on my lap or on a table, provides the best long-form reading experience of any hardware I’ve ever used, bar none.   I am certainly not implying that the experience of running Chrome OS and Android apps on my Pixelbook’s touch screen in tablet mode even approaches that of the iPad, but that is a compromise that, at least for now, seems justified in light of the benefits the full-fledged Google web apps bring, at least to me.  When using the iPad, I had to actually remote into a Mac (using the outstanding Jump Desktop) to sort a data range in a Google Sheet by one column and then by another, or to do a complex Gmail search, or to access calendar entries over a year old, or to edit my Strikingly site… you get the idea.


It seems that what I’m saying is that in an ideal world, native Google iOS apps would work as well on the iPad as their web counterparts.  And perhaps I am, but that seems highly unlikely.  When using Google apps on the iPad (or, for that matter, when using third party clients to access Google services), I get a feeling of fragility, of “strange bedfellows,” if you will.  Google obviously has to make iOS apps,  but they seem to do so with reluctance.  Microsoft made Excel for iOS with gusto.  Google made Sheets for iOS with disdain. You can feel it when you use the apps.  Google also makes rich APIs available to software developers so they can make apps that access Google’s services, but those apps frequently add unwelcome additional “functionality” to the services, fail to carry forward Google’s basic philosophies, or are prone to break if Google upgrades or makes changes to the back end.


I am not a fan of computer platform zealotry.  My thinking is that different platforms offer different advantages and different tradeoffs.  I love where Apple is going with iOS 11 on the iPad, and I hope they continue on that path.  As befits Apple’s hardware prowess, both iPads Pro (12.9” and 10.5”) are magnificent machines, and either of them is more than capable enough to be my primary computer.  But the Pixelbook is no slouch; it’s a pretty impressive machine in its own right.


It’s a close one, folks.  Both the iPad and the Pixelbook offer splendid computing experiences.
At this time, though, in my personal case, the Pixelbook and its no-compromise access to Google’s ecosystem and to other services that shine most on the web ekes out a win over the iPad and its superior tablet experience.


Your mileage may, of course, vary.  But one thing is certain: in my 38+ years of dealing with personal computers, no time has been as exciting as right now.