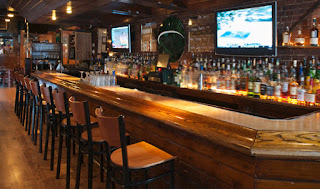 He was sitting alone at the bar, just finishing his tuna tartar, when the three women entered the restaurant.  Girls night out.  They also sat at the bar, to his right.  They engaged in non-stop conversation, paying him no heed as he continued to alternate his attention between “Top Gun,” showing on the TV screen on the left side of the bar, and “Chef,” on the right.

He could not help noticing, though, that there was clearly something special about the woman to his immediate right.  She was gorgeous, but it was more than that.  Her exotic beauty, combined with her natural elegance and grace of movement, made her profoundly alluring. She made everything (and everyone) around her fade away.  He was mesmerized.  Yet he didn’t want to appear rude, or interrupt the women’s conversation, so he didn’t approach her.  Yet.

Suddenly, there was an instant when the two women furthest from him were talking to each other, and she was momentarily disengaged.  Carpe diem.  He asked her what she was drinking, and remarked on her uncanny resemblance to the actress Angelina Jolie, bringing his friend Nunzio, the bartender, into the conversation.  They began to talk.

They talked about anything, and everything, with the ease of old friends.  They discovered all sorts of commonalities in their interests, values, and in their shared diversity of background.  She was intelligent, knowledgeable, and articulate (in two languages).  She listened as well as she spoke.  The default condition of her face was a smile, and she had an easy, delightful laugh.  Conversation hadn’t been so enjoyable and, well, fulfilling, in years. Many.  He had been mesmerized by her exterior.  Now, he was also enthralled by her interior.

They continued to talk.

Meanwhile the other two women, who had continued their one-on-one conversation, were ready to go on to the next bar on their schedule, just down the road.  She resisted, though, wanting to stay a bit longer.  He was feeling a bit guilty about disengaging her from her friends, but at the same time wanted nothing more than to continue to spend time with her, only her.  There was something he was beginning to fantasize about… but he didn’t allow himself to believe it was possible.

And then, it happened.

She told her friends to go ahead to the next bar, that she would stay with him, and that they might, possibly, meet up with them later.

He will spend the rest of his life savoring that moment.  Hopefully, with her by his side.