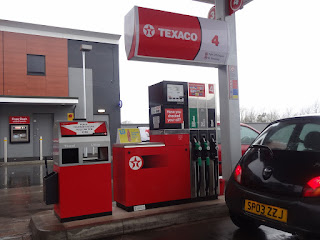 Ladies and gentlemen: the story you are about to read is true. Only the names (and a few facts) have been changed to protect the innocent.

As he walked around the back of his car, wallet in hand, to get to the gas pump, Joel’s phone vibrated in his pocket.  He quickly swiped the credit card, selected the gasoline grade, popped the fuel tank open and put the nozzle in place.  He then put the credit card back in his wallet, and laid the wallet on top of the fuel pump so that he could quickly fish the phone out of his pocket and take the call.  It ended up being a long conversation, so by the time it was over the tank was full and the pump had automatically shut off.  Joel put the phone back in his pocket, hung the nozzle back on the pump, and drove home.

The wallet, forlorn, lay helplessly on the pump.

It was a long drive, and Joel took the time to think about the implications of his telephone conversation.  It was only about an hour later, when he got home, that he realized he had left his wallet at the gas station.  He tried to call there, but the number he found online was inoperative.  Driving an hour back to the station seemed futile, as Joel was sure by that time someone would have happened upon the wallet, and would have been up to no good.  He cancelled his credit cards, ordered replacements, and requested a duplicate copy of his driver's license.

Hello, I have found a wallet that belongs to Joel Ferguson. I'm hoping this is you.  If it is, please contact me at (813)555-1234 as I would like to return it. Thanks!
Barbara Thompson

Joel immediately called the number.  The otherworldly charm and kindness of the woman who answered was such that it placed her in fictional 1950’s Mayfield, not today’s South Florida.  Barbara offered to mail Joel’s wallet back to him.  Joel thanked her.  Profusely.

A few hours later Joel received a text from Barbara with the tracking information for the wallet.  She didn’t merely stick the wallet in an envelope, slap a few stamps on it and throw in it a mailbox.  She took the time to visit a post office, and paid extra to send it via First Class Parcel Service, which includes tracking.

The very next day he received the package.  She had lovingly placed the wallet in a cushioned envelope for added protection.  Along with the wallet, (its contents, of course, intact), Barbara included a note, handwritten on notebook paper:

I hope this package finds you in good spirits.  I’m sorry I had to riffle through your wallet to find you, but I’m glad I get to return it to you.

Joel had told Barbara over the phone (and repeated it in a note he sent her along with a box of chocolate-dipped strawberries) that she restored his faith in humanity.  But as he thought about it, he realized that the opposite was really the case.

Barbara, Joel thought, is a remarkable human being, but the fact that she is remarkable is sad.  If humanity were deserving of his faith, Barbara’s actions when she found his wallet would be commonplace, not exceptional.  Joel discussed this incident with many people, and every single one of them was astonished that he got his wallet back.  We just don’t expect honesty from people, Joel thought, because we rarely get it.   So Barbara’s actions did not restore his faith in humanity.  They only made him realize just how wonderful the world could be.

If it were full of Barbaras.

Photo by KRoock74 [CC BY 3.0 (http://creativecommons.org/licenses/by/3.0)], via Wikimedia Commons