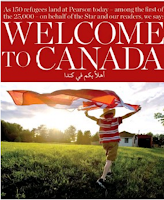 On behalf of the Star and its readers, we say ‘Welcome to Canada - Ahlan wa sahlan’ to the first refugees arriving this week from Syria.

You’re with family now.  And your presence among us makes our Christmas season of peace and joy just that much brighter.

The people of Toronto are honoured to greet the very first group of 25,000 Syrians who will be arriving in this country in the next few months, and who have chosen to make a new life here. It’s been a long trek, but you are no longer refugees. Your days of being strangers in a strange land are over.

You are permanent residents of Canada now, with all the rights and protections and possibilities that confers.

You’ll find the place a little bigger than Damascus or Aleppo, and a whole lot chillier. But friendly for all that. We’re a city that cherishes its diversity; it’s our strength. Canadians have been watching your country being torn apart, and know that you’ve been through a terrifying, heartbreaking nightmare. But that is behind you now. And we’re eager to help you get a fresh start.

By the way, don’t be fooled by the gentle weather. You’ll need those parkas, mittens and boots before very long. And the kids will need skis, snowboards, ice skates and toboggans, too. We don’t endure winter. We throw ourselves into it.

And while you’ll find plenty of folks who speak Arabic, we have our own dialect that you may hear on the streets. Our city, Toronto, is pronounced Tronna. The hockey team is the Leafs (or Buds), not the Maple Leaves. The Red Rocket is our transit system. The local term for a loser is hoser. We’re cheezed when someone annoys us. We make a Timmy’s run to buy a coffee. And we end every sentence with, eh.
So that’s pretty much it for now, eh.

Instead, here’s how the the Republican presidential candidates stand on the Syrian refugee issue, based on this summary from ThinkProgress.org:

Donald Trump would not only ban Syrian refugees from coming to America, but also deport the ones who are already here.

Ben Carson would cut off federal funding for any program that would help Syrian refugees resettle in the United States.

Marco Rubio believes the United States won’t be able to take more refugees.  “It’s not that we don’t want to,” Rubio said on ABC’s This Week. “It’s that we can’t.”

Jeb Bush believes America should refocus its efforts on taking in Christians instead of Muslims.

Rand Paul believes it’s “misplaced humanitarianism” to continue accepting refugees into the United States in light of the Paris terror attacks, and said he would be introducing a bill to block visas for travelers from “countries with a high risk of terrorism.”

John Kasich believes that Syrian refugees shouldn’t be allowed to resettle in the United States.

Chris Christie has said that If elected he would not accept Syrian refugees into the United States — not even “orphans under the age of five.”

Instead of extending a helping hand, we want to pull up the proverbial ladder behind us.  We got ours, so screw everyone else.  Terrorism already turned us into a surveillance state, and our fear is slowly peeling away our humanity, exposing our primordial tribalism and xenophobia.  We are playing right into the terrorists’ hands.

As the Republican candidates sell us selfishness under the false guise of self-protection, and the Democrats hem and haw, I’m beginning to think this proud lady would feel more comfortable in Toronto Harbour.