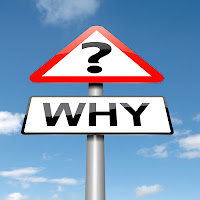 Dictionary.com provides seven definitions for the word “why”: one as an adverb, three as a conjunction, two as a noun and one as an interjection.  All are interrelated and have to do with the reasons for things, except one.  The interjection.  This is the one that consternates me (and, hopefully, consternates you as well).  Why would a word whose meaning is related to the reasons for things be  “used as an expression of surprise, hesitation, etc., or sometimes a mere expletive”?

For example, why is the word “why” used in the following manner:

Or (from Charlotte’s Web by E.B. White, also of “The Elements of Style” fame):

“Why, how perfectly simple!” she said to herself.

Granted, the use of “why” as an interjection is scarce in contemporary conversation, and is sometimes used to depict dialogue as dated in TV shows, such as this SNL sketch, which uses such “Three Stooges”-style phrases as “why, I oughtta pound you”, to help set the scene in the 1930’s.  James Stewart uses “why” as an interjection repeatedly in 1946’s “It’s a Wonderful Life”.  But why did the word “why”, which dates back prior to the year 900 and derives from the Old English hwæt, wind up being used as an expression of mild surprise, beginning around 1510?

Although I was unable to find a definitive, authoritative answer, I did find plausible speculation from an apparently reputable source, user Cerberus, who is ranked 11th in all-time reputation on the English Language and Usage site from the Stack Exchange network of Q&A websites.  The esteemed Cerberus holds that “why”, used in a rhetorical sense, evolved into “a mere interjection of surprise”.  I will use my own sentences to explain the evolution below, based upon Cerberus’s logic:

First, used as part of a rhetorical question: “We’d better take an umbrella tonight.  Why is that?  Because it’s pouring!”

Then, used on its own as the rhetorical question reduced to its essence: “We’d better take an umbrella tonight.  Why?  Because it’s pouring!”

It makes sense that it then developed into a method of calling attention to the statement which follows it: “We’d better take an umbrella tonight.  Why, it’s pouring!”

Still a rhetorical question, but it seems likely that it would evolve from there to the interjection usage.  The only thing we know for sure is that, whichever way this happened, it took around 600 years!